Mr RULFS was not only an important collector of antique magic books but also a bookbinder. He often bound and rebound many of the soft bound books he came across. That’s why I was very interested to know more about him.
What put me on his track? I recently bought a copy of « Recollections  of Robert Houdin. Clockmaker Electrician Conjuror » by William Manning. I already had at least three copies but this one was published by BURLINGAME in 1898 and Mr RULF had the good idea to add a catalog of 40 pages describing with superb illustrations of the magic stuff sold by Burlingame & C°.
The binding was what we call « un bradel » in French, covered with a green cloth but the title: C.L. BURLINGAME CHICAGO. 1898. is gold stamped on the back, without any mention of MANNING.
This pamphlet by Manning is very interesting because it’s the only direct account we have of the performance of Robert HOUDIN and the different tricks he performed.

Charles Leslie Rulfs was a Professor of Chemistry  and researcher during 35 years at the University of Michigan in Ann Arbor until he retired on december 31st , 1984. He was also well known as an amateur magician and a great children entertainer.

My thanks go to Dan Bradbury  for the valuable information he gave me. 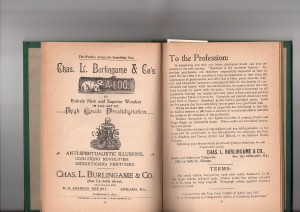